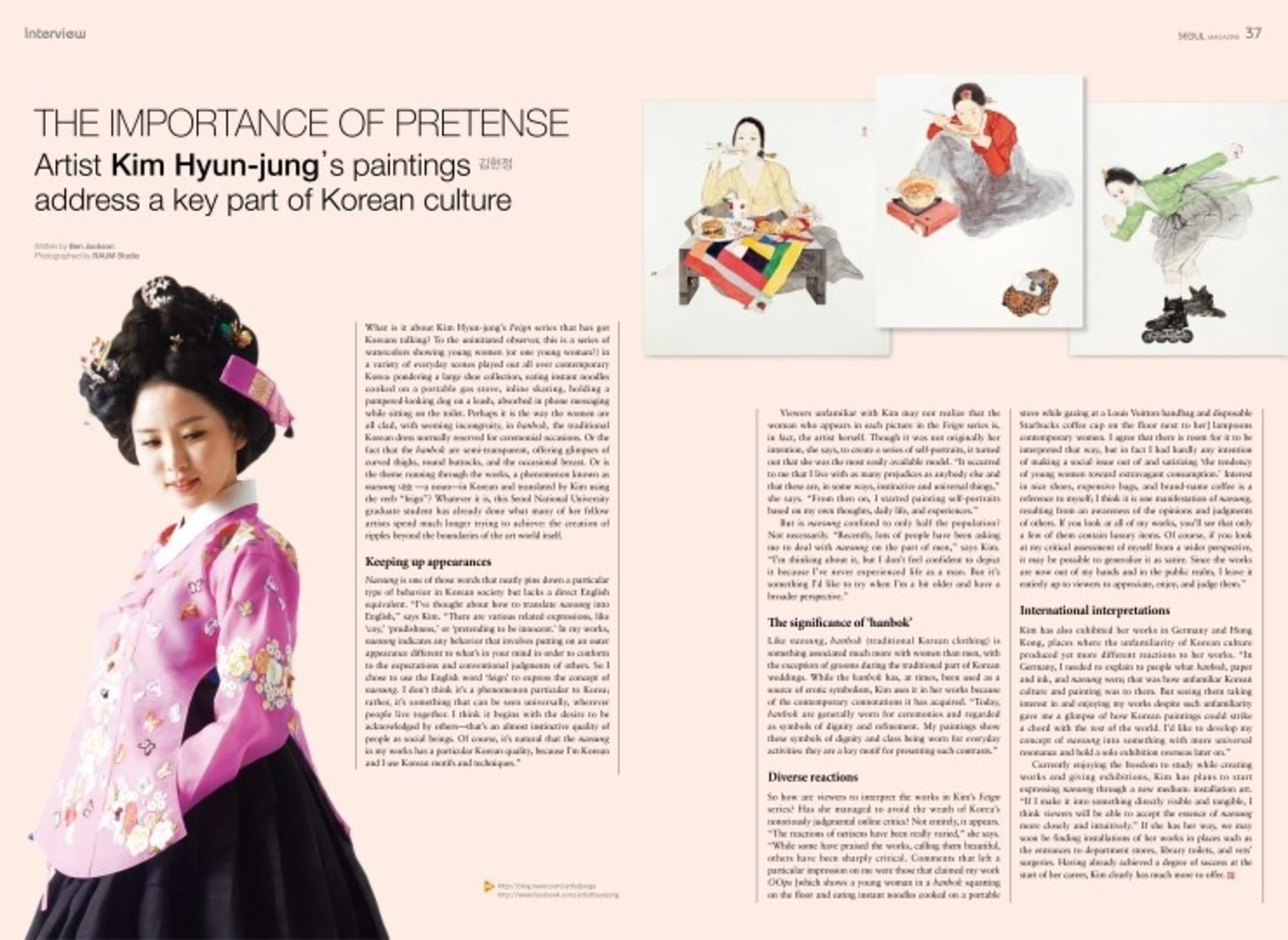 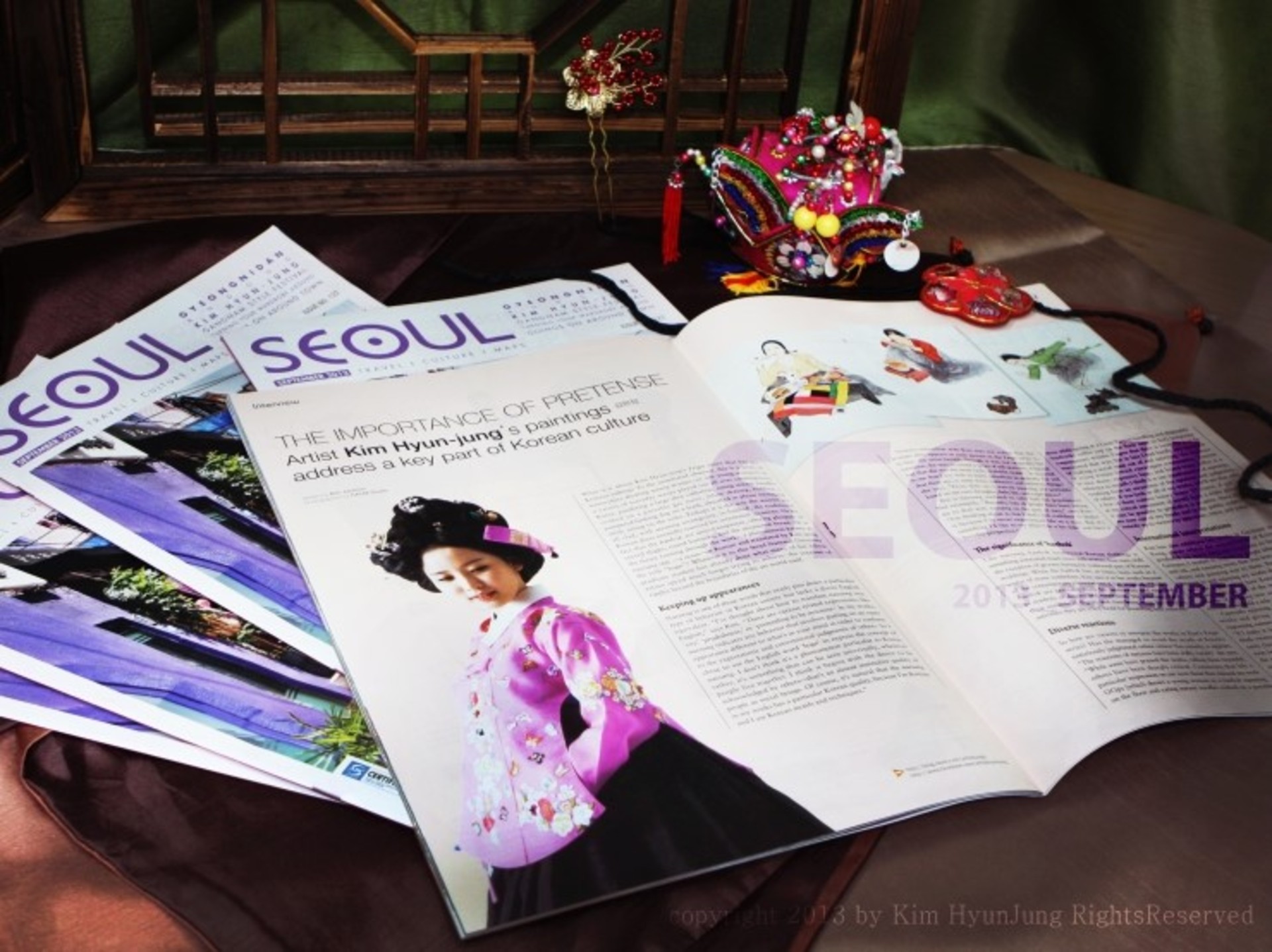 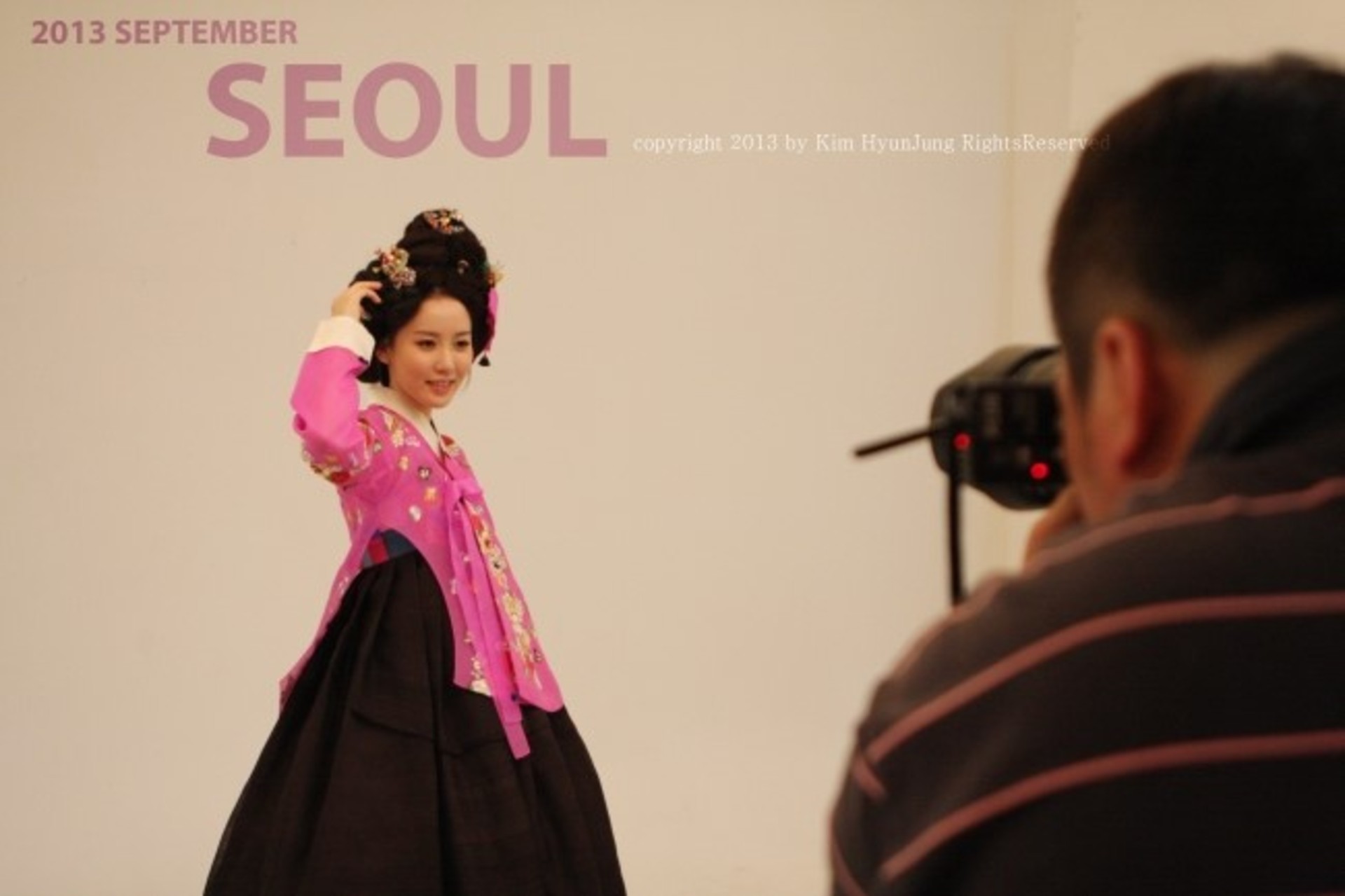 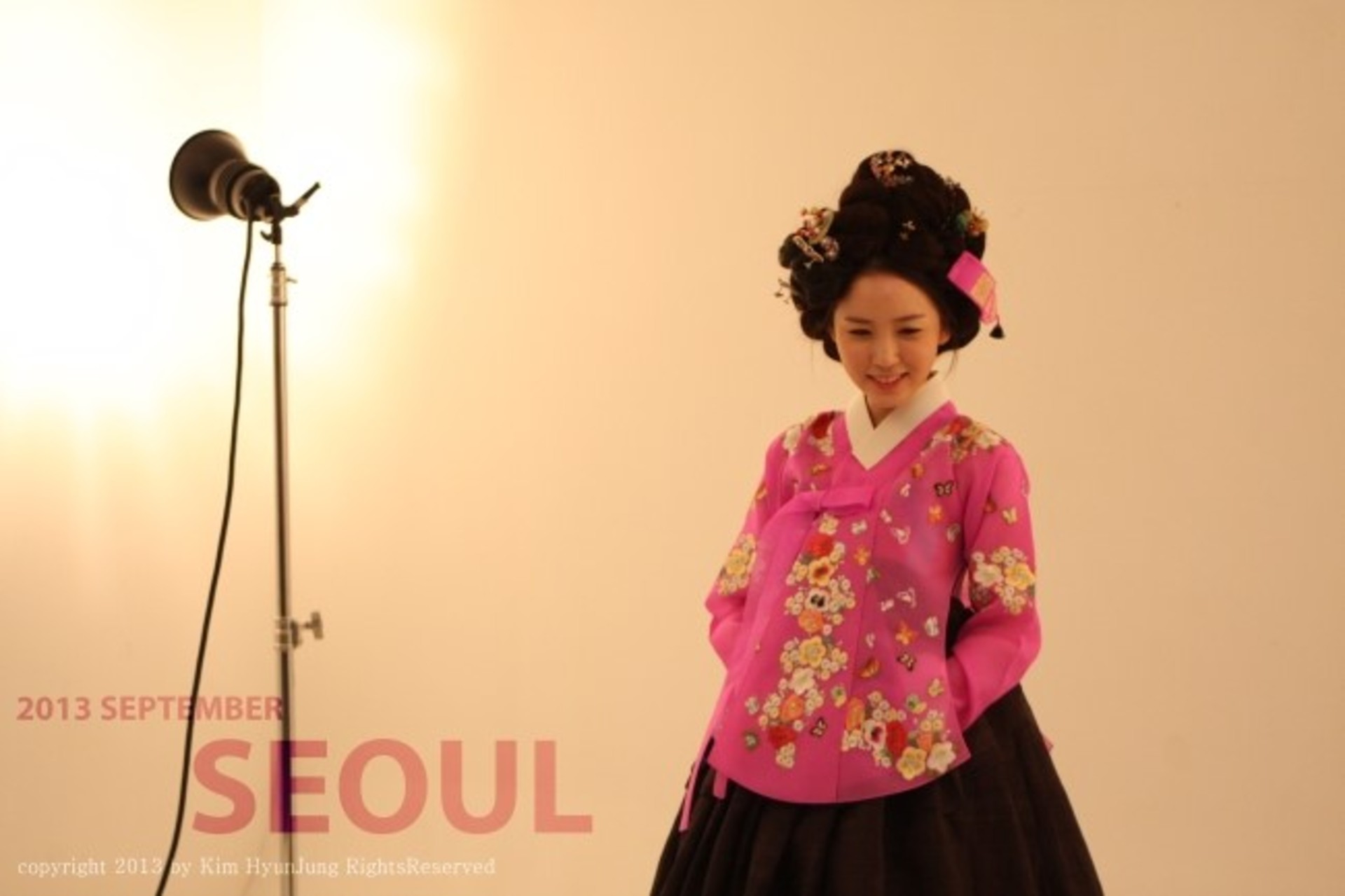 What is it about Kim Hyun-jung’s Feign series that has got Koreans talking? To the uninitiated observer, this is a series of watercolors showing young women (or one young woman?) in a variety of everyday scenes played out all over contemporary Korea: pondering a large shoe collection, eating instant noodles cooked on a portable gas stove, inline skating, holding a pampered-looking dog on a leash, absorbed in phone messaging while sitting on the toilet. Perhaps it is the way the women are all clad, with seeming incongruity, in hanbok, the traditional Korean dress normally reserved or ceremonial occasions. Or the fact theme running through the works, a phenomenon known as naesung 내숭-a noun-in Korean and translated by Kim using the verb “feign”? Whatever it is, this Seoul National University graduate student has already done what many of her fellow artists spend much longer trying to achieve: the creation of ripples beyond the boundaries of the art world itself.

Naesung is one of those words that neatly pins down a particular type of behavior in Korean society but lacks a direct English equivalent. “I’ve thought about how to translate naesung into English,” says Kim. “There are various related expressions, like ‘coy,’ ‘prudishness,’ or ‘pretending to be innocent.’ In my works, naesung indicates any behavior that involves putting on an outer appearance different to what’s in your mind in order to conform to the expectations and conventional judgments of others. So I chose to use the English word ‘feign’ to express the concept of naesung. I don’t think it’s a phenomenon particular to Korea; rather, it’s something that can be seen universally, wherever people live together, I think it begins with the desire to be acknowledged by others-that’s an almost instinctive quality of people as social beings. Of course, it’s natural that the naesung in my works has a particular Korean quality, because I’m Korean and I use Korean motifs and techniques.”

Viewers unfamiliar with Kim may not realize that the woman who appears in each picture in the Feign series is, in fact, the artist herself. Though it was not originally her intention, she says, to create a series of self-portraits, it turned out that she was the most easily available model. “It occurred to me that I live with as many prejudices as anybody else and that these are, in some ways, instinctive and universal things,” she says. “From then on, I started painting self-portraits based on my own thoughts, daily life, and experiences.”

But is naesung confined to only half the population? Not necessarily. “Recently, lots of people have been asking me to deal with naesung on the part of men,” says Kim. “I’m thinking about it, but I don’t feel confident to depict it because I’ve never experienced life as a man. But it’s something I’d like to try when I’m a bit older and have a broader perspective.”

The significance of ‘hanbok’

So how are viewers to interpret the works in Kim’s Feign series? Has she managed to avoid the wrath of Korea’s notoriously judgmental online critics? Not entirely, it appears. “The reactions of netizens have been really varied,” she says. “While some have praised the works, calling them beautiful, others have been sharply critical. Comments that left a particular impressions on me were those that claimed my work Oops [which shows a young woman in a hanbok squatting on the floor and eating instant noodles cooked on a portable stove while gazing at a Louis Vuitton handbag and disposable Starbucks coffee cup on the floor next to her] lampoons contemporary women. I agree that there is room for it to be interpreted that way, but in fact I had hardly any intention of making a social issue out of and satirizing ‘the tendency of young women toward extravagant consumption.’ Interest in nice shoes, expensive bags, and brand-name coffee is a reference to myself; I think it is one manifestation of naesung, resulting from an awareness of the opinions and judgments of others. If you look at all of my works, you’ll see that only a few of them contain luxury items. Of course, if you look at my critical assessment of myself from a wider perspective, it may be possible to generalize it as satire. Since the works are now out of my hands and in the public realm, I leave it entirely up to viewers to appreciate, enjoy, and judge them.

Kim has also exhibited her works in Germany and Hong Kong, places where the unfamiliarity of Korean culture produced yet more different reactions to her works. “In Germany, I needed to explain to people what hanbok, paper and ink, and naesung were; that was how unfamiliar Korean culture and painting was to them. But seeing them taking interest in and enjoying my works despite such unfamiliarity have me a glimpse of how Korean paintings could strike a chord with the rest of the world. I’d like to develop my concept of naesung into something with more universal resonance and hold a solo exhibition overseas later on.”

Currently enjoying the freedom to study while creating works and giving exhibitions, Kim has plans to start expressing naesung through a new medium: installation art. “If I make it into something directly visible and tangible, I think viewers will be able to accept the essence of naesung more closely and intuitively.” If she has her way, we may soon be finding installations of her works in places such as the entrances to department stores, library toilets, and vets’ surgeries. Having already achieved a degree of success at the start of her career, Kim clearly had much more to offer.